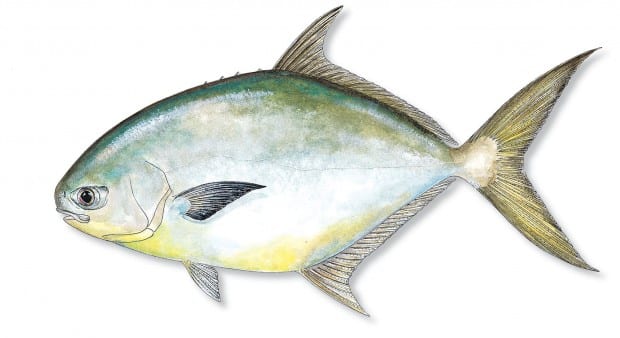 This article originally appeared on floridasportfishing.com. It was written by T.M. Golub
I remember as a kid scanning the shoreline looking for the signs of sand fleas, leading to happy digging in order to uncover the small crustaceans. Nothing was as much fun in the absence of waves considering the resulting playground. Little did one know given age and fishing inexperience as to the favored bait of Florida pompano, the highly desired and popular fish that roam the state’s sandy shorelines.
Florida is famous for many things notwithstanding its subtropical climate, amusement parks and white sand beaches extending for 600 miles around a jutting peninsula. Pompano can be listed in the same category as a likely attraction for tourists, locals and chefs alike given its accessible abundance and opaque flesh that’s perfect for the skillet.
With a diet rich in crustaceans, fillets have a mild flavor and inspire dishes coupled with sauces comprising white wine, shrimp and crabmeat. But to get there, you have to catch this species using bait gathered on scene. Techniques utilized to capture these critters are tailor-made for the beachcomber in all of us, using store-bought or homemade rakes built to sift and filter sand at the water’s edge.
Also known as mole crabs, sand fleas have a hard, rounded shell covering several sets of tiny legs meant for paddling through the water or digging in wet sand. Subject to turbulent wave action, extreme temperature changes, tidal fluctuations and a constant barrage from predatory game fish and pesky birds, the organisms that live in this zone have uniquely adapted to the harsh extremes. Being small, their size can be anywhere from a half inch to an inch with females slightly larger, while all devoid of the claws that characterize their crabby cousins.
During their reproductive season, female sand fleas lay roughly 50,000 eggs per month in the sand, taking approximately 30 days to develop. Some anglers believe the orange hue of a female’s egg bundle is what attracts the pompano to the sand flea when feeding. Jigs meant specifically for pompano like Doc’s Goofy Jigs tend to have elements of orange or pink in color due to this natural occurrence.
Upon hatching usually just after sunset or when waves and tide tend to be at their peak, juvenile sand fleas will then begin free swimming into the surf. At sea, they will spend the next 3- to 6-months maturing, then it’s back to the beach to meet up with older bugs who spent the winter months buried within the damp sand in the swash zone.
As waves break and recede, sand fleas will extend feeder antennae to collect nutrients to feed upon. When receding wash takes the form of a V pattern, this notes clustered colonies for the taking. Accompanied with a sand flea rake, stand at the water’s edge, look for the V patterns and scoop just after the next wave comes and goes. While you can certainly catch them during any hour of the day, I’ve found sand fleas tend to concentrate more toward periods of high water. Additionally, the presence of sand fleas will be a direct correlation to the water clarity and sediment on your chosen beach, so it’s best to avoid areas that have experienced recent beach replenishment projects in favor of more natural and undisturbed shorelines.
If your mission is to capture these bugs for bait, do so considering sand fleas don’t normally survive outside their habitat for too long. While on the beach, some damp sand in a small container out of the sun will be good for preserving your live sand flea catch. When needing the bait for future use within a few days, place in the refrigerator in a cooler or container with ice. If your object is to utilize them for a coming fishing excursion, it is recommended you prepare the sand fleas accordingly to maximize their effectiveness.
Start by rinsing your sand fleas to assist in helping remove their secreted excrement that will speed up the decaying process if frozen as is. From here, dunk the sand fleas in a pot of boiling water for no more than 15 seconds. Immediately rinse with cold water to stop the cooking process and pack in a heavy-duty Ziploc or Tupperware container and place in the freezer. If you don’t package appropriately the crabs will be brittle once thawed and won’t remain on the hook after a cast. If you leave them in the boiling water for too long the shells will become soft and also fall off the hook with minimal disturbance.
Scientists and seasoned salts agree that it’s likely pompano migrate along with healthy and abundant sand flea populations, lending credence to those who only use this bait in their desire to land a one- to three-pound pompano for the skillet. From inexperienced fishermen to those with more catches to their name, the smell of a lonely beachside early in the morning raking for sand fleas and finding oodles in the scoop will get anyone excited knowing what comes next.
Book A Naples Fishing Charter
Chasin’ Tales’ Naples fishing charters gives you the opportunity to make a catch in the Gulf waters. Captain Geoff has been navigating the Gulf for years! To book a trip, call 239-216-0378 or click herefor more information.