All About the Ten Thousand Islands 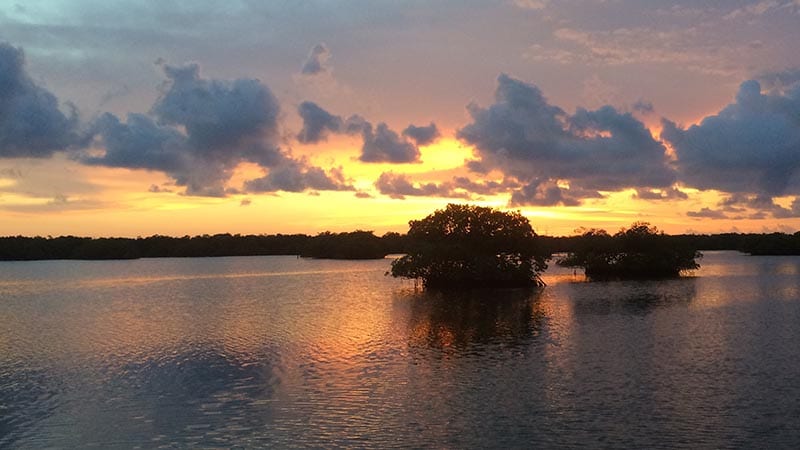 Inside the Ten Thousand Islands

The Everglades is seen as a mystical place, not only in Florida but in all of America – it has existed for approximately 5,000 years. It is the largest remaining subtropical wilderness in the states filled with mangrove forests, grassy marshes and a variety of wildlife like ospreys, alligators, Florida panthers, West Indian Manatees, bottle-nosed dolphins, over 90 species of butterflies and more.

Even more mysterious and alluring is a specific part of the 1.5-million-acre wetlands: The Ten Thousand Islands. Just look on a map to see how this area got its name. In reality, however, the islands are in the hundreds not the thousands. The islands house much wildlife, marine species and plant life all between the mainland and the Gulf of Mexico. In the summer on a small Island in Pumpkin Bay, 10,000 birds have been known to roost. Other animal sightings in the area that can occur include: loggerhead sea turtles walking ashore to nest on beaches, manatees feeding in estuaries or sheltering from the cold in the Faka Union Canal, and bald eagles in flight. As for plant life, fresh and brackish water marshes are covered in cattails, bulrushes and cordgrass; higher ground islands are filled with slash pine and pigeon plum plants and trees.

It has been said one of the best ways to see or experience the Everglades is by boat. The maze-like area is full of lagoons, islets, mangrove tunnels and shallow ocean passages. The area is also difficult to navigate, so joining a captain on a fishing charter is a great way to take in all the exotic scenery the area has to offer – things you won’t see anywhere else. Being such a large and remote area of the wetlands, a trip through can be a very private, serene experience.

History of the Islands

According to the Florida Department of Environmental Protection, the Ten Thousand Islands and Rookery Bay area have a rich history. The abundance of seafood has attracted humans to the area for hundreds of years. Years ago, Calusa Indians dug canals and built land with discarded shells, while Seminole Indians and outlaws used the area as a refuge. By the late 1800’s, European settlers were occupying several of the larger islands, and commercial fishing was the major source of income. With better settlements and cities, people migrated over to Marco Island, Naples, and Everglades City. By the 1940’s, only a few people remained on the islands. Today, people no longer live on the islands and the area is as intact as it was back when the earliest settlers arrived, according to the U.S. Fish & Wildlife Service.

At any given time, research is being conducted on the Ten Thousand Islands area involving mangrove and estuary system, functions and restoration. The Rookery Bay National Estuarine Research Reserve helps support such research. The Reserve protects 110,000 acres of coastal lands and waters at the northern end of the Ten Thousand Islands. The Ten Thousand Islands National Wildlife Refuge was created in 1996; it is a 35,000-acre refuge that protects the habitat and species within, including endangered species like the peregrine falcon and wood stork. It is located about 20 miles southeast of Naples, Florida.

The public can experience the refuge in a variety of recreational ways, including: boating, bird watching, camping, duck and coot hunting, canoeing, kayaking, and of course, fishing. The backwater and nearshore fishing team at Chasin’ Tales Fishing Charters can take you on a journey through The Ten Thousand Islands from a Marco Island fishing charter location. To schedule a nearshore and backwater fishing trip around these unique islands, contact Chasin’ Tales at 239-216-0378.